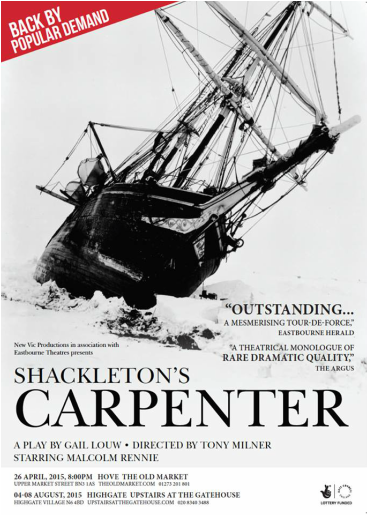 He challenged ‘The Boss’ in the ice floes of Antarctica.
Now again, alone and destitute in the middle of a still night,
he challenges him one last time. Shackleton's Endurance sank
in Antarctica, leaving him and his crew of 27 stranded.
Harry McNish, Shackleton’s carpenter and brilliant
shipwright, challenged The Boss, but went all the way with
him, ensuring all lives were saved after a journey universally
agr﻿eed to be the most astonishing voyage of survival in history.

http://oberonbooks.com/gail-louw-collection
Tour INFORMATION
Ellis in his latest 'Teach Yourself Acting" blog made comment about former students and makes reference to Malcolm Rennie and Shackleton's Carpenter

Ellis Jones, for many years has been a senior director at the Royal Academy of Dramatic Art, one of the world’s most celebrated acting schools, has supervised the training of many of today’s most exciting actors. He was RADA’s Head of Acting from 1993 to 2003, the Academy’s Vice-Principal from 1998 to 2003, and more recently has been Creative Director of RADA’s Enterprise Company, producing educational and corporate projects in the UK and abroad. Ellis is the author of “Teach Yourself Acting” (Hodder Headline 1998).

"Every week we London theatre tutors rejoice as former students garner awards and blink as the press-cameras flash – but what of those who dedicate time in their lives, often several years, to training to be actors and never achieve lasting “household name” status as performers? Do they regard their learning to speak and move well, to study and interpret great texts, as a waste of time?  Well this summer I’ve encountered at least two people you could ask. My guess is they wouldn’t change a thing – they’ve gone on to amazing, fulfilling success and I bet don’t regret for a moment the absence of paparazzi attention

Malcolm Rennie – think lovely character work in “Mr Selfridge”, in “Pride and Prejudice” and lots of other shows – and then look out for “Shackleton’s Carpenter”, a cracking one-man play currently on tour. Gail Louw has written a tight, witty and moving script about a key figure in one of the great exploits in the history of antarctic exploring, whom we discover as an abandoned derelict on the wharf at Wellington, New Zealand. If you’re interested in what British class attitudes meant (and often still mean) then here’s a telling and disturbing true story. If you’re interested in acting, then go and learn from Malcom’s command of the stage, his assured and thrilling vocal skill – and above all for his painstaking exploration of every nuance of the script and the situation it portrays. Masterly work."

You can read the full blog here: http://teachyourselfacting.com/category/blog/
Watch Malcom Rennie on Latest TV BTN
For all his bravery and ingenuity, McNish was one of very few who never received the Polar Medal.

​What was it that caused this man to antagonise the hero of Antarctica? How does he come to terms with it now,
alone and destitute on the wharfs of Wellington, New Zealand?

Gail Louw and New Vic Productions have produced a number of new plays including Blonde Poison which toured nationally and
won an Argus Award for Artistic Excellence at the Brighton Festival in 2012. Her recent play Duwayne won Best New Play at
the Brighton Fringe Festival 2014.